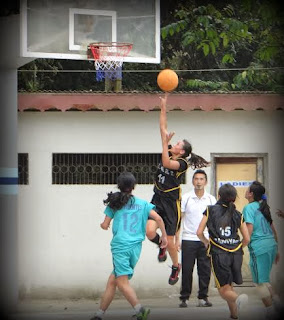 The young players hands are engraved with the names of celebrated Women’s National Basketball players. Though each display a different champion, they have all accomplished the same seamless record of points, assists, and defensive rebounds that proclaimed their team the first school from the entire northeast Indian region to win the Central Board for Secondary Education (CBSE) under-19 Basketball Championship.

In a tiny hamlet called Gangyap (meaning ‘behind the hills’ in local Bhutia dialect in Sikkim, India), a 16-woman basketball team is clinching women’s basketball trophies and grabbing the local news headlines. The team captain, Nima Doma Bhutia, alongside fifteen women players are first generation learners attending Eklavya Model Residential School (EMRS) for tribal children that is funded by the Ministry of Tribal Affairs, Government of India. I first heard of the girls of Gangyap through local news in Sikkim India and began contacting friends in Sikkim to reach the girls' coach. Since electricity is intermittent and phone signal unstable in Gangyap, it was very hard to reach the players coach by email or by phone but after three weeks I was able to contact Sidharth Yonzone.

The school, headed by the players’ coach Principal Sidharth Yonzone, is the first of its kind to provide quality education for poor tribal children from Sikkim’s remote reaches. The girls all come from the west district of Sikkim, mainly from small villages, wherein they join the school through an entrance examination at class 6.

Most of these girls come from economically deprived families where gathering wood, milking the cows and cutting the fodder for livestock feeding consume most of their day’s work. The rest of their time is allotted for basketball drills against the majestic landscape of Mt. Narsing. Gangyap is 19 kilometers north of Tashiding, en route to the remotest village of Sikkim, Karjee. They say that only a small dusty village road connects this hamlet to the rest of the world, where families are cattle herders and farmers by profession and their children cannot afford to leave the village due to unaffordable cost of education.

Training in a rolling terrain for years, the girls made their own basketball court from broken stone chips and carried cement to flatten the ground. Not even a rough court without a proper shooting hoop could deter the girls to realize their dreams of winning the basketball championship. In both 2011 and 2012, Nim Doma Bhutia clinched the Most Valuable Player Award and the EMRS Gangyap team won the National Championships in 2011 and 1st runner up award in 2012. Sikkim had never won a medal in basketball before and the Gangyap girls were the youngest and least experienced team. Jigmela Wazilingpa of the Basketball Association of Sikkim is simply amazed, “A very small school in such a rural area in Gangyap is doing so well in the national level. In fact, they are now the best basketball school team in India, ” he says during an early morning basketball practice during Dashain and Tihar, a widely celebrated Hindu tradition where people come home to their families, and even those working abroad come home during this time of the year. I am impressed by the players hardwork and dedication, practicing even during this holiday.

The team captain Nima Doma Bhutia and the players credit their achievements to Coach Sidharth. Sidharth is not even a basketball player and never had any professional basketball coaching in his life. When asked how he has been able to introduce the game to a place that has no deep impression of basketball before, he says, “I am a basketball fan, though I hardly played in school. I had previously introduced basketball and coached a mini team in another rural government school where I had earlier worked. So when I was offered this job as a Principal in EMRS, I brought along two of my players Rinchen Doma and Nim Lhamu, now aged 17 and 18, and built a team around them. Basketball was an entirely new game for everyone here and only the more privileged schools normally play this game. It was a blessing when I discovered the hidden talent of the players, especially the captain Nima Doma. After a while, some of the junior players were inspired by watching Nima Doma, Rinchen and Nim Lam play and so they joined the team and started playing with them.”

Nowadays, the girls play as far as Thimpu in Bhutan after being invited by the Bhutan Olympic Committee and they have consistently won all the games by huge margins. Returning from the competitions proved to be an extraordinary experience for the girls. The other students, teachers and the local community members celebrate their return. They are showered with flowers and accompanied by a live band playing and singing. “Sometimes some well-wishers stop us in the middle of the parades and offer khada (silk scarves) to congratulate us. We normally stop at Cloud 9, a hotel in Kalimpong, West Bengal that belongs to Coach Sidharth’s father whom we often call Coach’s Dad. Coach’s dad always celebrates our victories with cakes, ice cream and sumptuous dinners celebrations,” one of the players tells me over the phone. 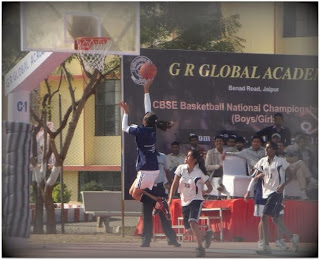 The ordeal was never an easy path for the girls. The team composed of Diki Doma Bhutia and Tshering Eden Bhutia as guards, Nim Lhamu Bhutia as center, Rinchen Doma Bhutia as forward and captain forward Nima Doma Bhuti usually start their practice early morning at 7:30 and then resumes after classes from 3:30 to 5:30 in the afternoon. Equally strong players Manita Subba, Pem Choden Lepcha, Bimochan Tamang, Tashi Tshering Sherpa, Binu Hangma Subba, Norzum Bhutia, Lakchung Lepcha, Kinchumit Lepcha, Deechen Bhutia, Pema Lhamu Bhutia and Kinzang Chomo Lepcha join them. “We have different drills during practice, if one spoils it then the entire team usually shares the responsibility,” say another player.

Even more, playing basketball proved to be life changing for the girls. It has given them huge exposure and their basketball journeys allowed them to experience glories and losses that taught them about realities in life. Though they sometimes lose, they learned to eventually accept them. “It made us mentally tougher and prepared us to face the challenges in our everyday life. It has also taught us that we would not have accomplished anything if the ‘discipline’ factor were missing. Basketball also sharpened our way of thinking, for instance, we make decisions in split seconds during the game, and this has been carried to our classrooms. We can say that we are performing better in our classes too,” one player beams proudly.

The girls are preparing for the next CBSE under 19 Nationals from the 23rd to 28th of December in Agra, India. Coach Sidharth is confident with their drills but says, “We are working hard at the moment but plagued with a number of injuries. Hopefully they will be fine soon. We are emphasizing on defense and trying to improve our rebounds. Our players are not as tall as the other players from different states.”

Hopeful that they will bring the highest honors for Gangyap this time, Coach Sidharth is proud that they have made it this far. He often says, “According to many in the beginning, basketball was not meant for us, but all that has been proved wrong. Many people don’t believe that I’ve actually coached them but then again that doubt in them is a genuine compliment.”

The girls of Gangyap are thrilled to hear that their story will be published on The WIP, their very first exposure outside India. I am visiting their school this January and am currently raising funds to help the school to continue providing basketball skills to incoming students because I believe in education to fuel changes for the country.

True enough, the Gangyap girls have rippled enthusiasm and motivation across the country. Diki Yangchen, a social activist says, “Their success is a very interesting story, it’s a story of hope that inspires you, and it’s a story that makes you want to become a better person.”

This story was published in the women international perspective on December 9, 2013.
http://thewip.net/contributors/2013/12/for_girls_of_gangyap_basketbal.html