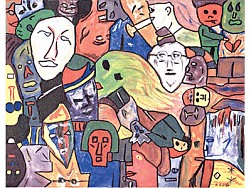 My own brush with discrimination is this: It was last year when on transit in Hong Kong when airport security shoved us to queue towards the Immigration desk. The guard’s voice was piercing as she ordered Filipino domestic helpers from the multitude of passengers to assemble into a separate row. The plane came from the Philippines and I was flying to Nepal. With me were throngs of migrant workers who looked terrified; most of them flying for the first time. As these migrant workers adhered to the guard’s orders, I saw how unfairly they were being treated. They were questioned loudly like criminals, scrutinised intensely and their separation from “us” was a marked exclusion in a country that will drive them away once they cease to be employable as domestic workers.

I could not lift my eyes to meet theirs. I felt hurt. There was something deeply inhumane about how they were being treated. My own compatriots had been branded for life-a bias judgment on Filipino domestic workers as inferior and were being treated like prostitutes. Never mind how eminently useful they are, how tirelessly they work even in the worst of circumstances or how well they raised a generation of Chinese kids. In the end, they are only seen as domestic helpers. What was most disappointing is that I only bit my lip at the sight of racial prejudice.

Dorje Gurung has proved to be better. Gurung, a Nepali teacher who taught at Qatar Academy, defended himself from seventh graders who poked fun at his appearance. Later, he was jailed in Doha for ‘insulting Islam’. The Washington Post reported that Gurung was accused of comparing all Muslims to terrorists after he had a chat with three 12-year-old boys who were making fun of him. At first, the teasing was light-hearted but then one student put a finger on Gurung’s nose. At this point, Gurung grew agitated and said remarks to the effect of, how would you like to be stereotyped, i.e., called a terrorist?

News reports asserted that Gurung had recently been having problems with students who did not respect his authority, in part due to his nationality. Despite the fact that Gurung is Nepali, the boys called him Jackie Chan, a Chinese actor, and allegedly pulled his hair and shoved him. Rupesh Pradhan, a lifelong friend who attended school with Gurung in Nepal, Italy and the US, confirmed that the mocking was not just verbal and actually got physical.

As soon as Gurung was fired from his job and later arrested, a sweeping signature petition was released online. The campaign ‘Government of Qatar: Release Dorje Gurung’ called for Gurung’s release from prison for trying to teach his students to be tolerant of people from other countries. With the mounting impact of new technology, social media became a powerful medium that carried a huge multiplier effect. Protesters online defined global discourse, that racial prejudice is practiced everywhere, committed innocently and because it is done in this manner, nobody notices the cycle. Whips of discrimination are in the hands not only of the elite but also of people who simply deem themselves higher and better than others.

The act of discrimination is not a trivial matter. The ignorance behind it ripples on the mighty scale of racial prejudice and robs a person of their humanity. The verbal assault, which we are sometimes guilty of, is an echoing slap of discrimination. Don’t we all, at one time or another, laugh at someone we deem different because they belong to a race other than ours, a race darker or simply different? To this day, I know people who take pains not to get sunburned as it will darken their skin.

I have heard similar stories told and sentiments expressed but I am astonished by the devotion of the global community who supported the campaign to release Gurung from Qatari prison. More than fourteen thousand steadfast protesters signed the online petition-his classmates from college, his Muslim friends, co-teachers, family and people unknown to him. The crusade succeeded because it reached the ears of the public. Within us, there arises a feeling of accountability and guilt. In our own tone of reproach, we are rooting for the possibility of change from the mindset of racial prejudice.

But quite laudably, Gurung, despite surely being affected by what happened, has chosen to look beyond it and beyond retribution. He craves something better; he wants peace. On May 14, he released a statement, “I’m home safe and sound!” True enough, Gurung is back in Kathmandu and he has brought with him a promise to make the gift of freedom worth the time and effort that people invested in winning it for him.

There are three things we can draw from incident.

One, we hear the cries of one but not the other. We failed to capture the depth of despair of Filipino domestic helpers who lost their residency case. Hong Kong’s highest court ruled unanimously that a Filipino woman who had lived and worked for nearly 27 years as a domestic helper was not entitled to permanent residency. The lawyer who represented Vallejos and Doming (two Filipino domestic helpers) said, “We will continue to struggle both inside and outside the court with our colleagues so that we no longer teach our children that there is such a thing as a second-class citizen.” The decision was followed around Asia as a sign of whether Hong Kong, a vast majority of whose population is ethnic Chinese, would embrace a more multiethnic future.

Two, in the scheme of things, the judicial stamp was the worst these domestic helpers have seen. Like some Filipinos in other countries who have been driven away after living there for most of their lives, they too will be barred from permanent acceptance into a country that they served for most of their lives. The court’s decision coincides with debates in the European Union and the US over what legal rights should be extended to illegal immigrants as opposed to contract workers.

And three, in the continuing cycle of discrimination, the Filipino domestic helpers lost the battle but Dorje Gurung prevailed.

This story was printed in OPED section of The Kathmandu Post